Did you know, according to the American Association of Pediatrics and TV-Free America, the average child sees between 20,000 and 40,000 commercial advertisements a year?  Seems astounding.  In the eighth grade as part of a year-long media literacy unit, we tracked our own hours in front of screens and the number of ads we saw even in a single week, and discovered that alas, this was in the realm of possibility.  This generation of children is exposed to more visual media stimulus than any generation before, and it is our responsibility to fortify them with the critical thinking skills to help them cope, thrive and contribute in this inundated society.  So what a pleasure to teach the upper graders to recognize the types of propaganda techniques in the media they see!  Recently, we studied jingles, slogans, logos and the idea of "branding," and students came up with their own brands, either for personalities, products what they would like to contribute in the future. Some of the ideas were really creative (natch, our kids!), such as starting up Manga publishing houses, trampoline factories, a rock-climbing training camp, a robot bagel dispensary (!) and a non-competitive talent competition, "Singing for Peace" (take that, American Idol!).   I was really interested when one student shared he would like to create scuba diving experiences for people in wheelchairs. 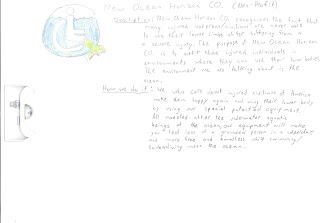 I was so impressed with the thought, and it was a teachable moment to boot:  we were able to see that such an opportunity imagined by this student really did exist, thanks to the efforts of artist Sue Austin! Click below to see this marvelous achievement.  (Austin also gave a more extensive TedTalk about her process and experience, which may be viewed here).


It's so splendid when technology can be used for sharing these Great Leaps for Peoplekind, instead of just selling toothpaste and cable, isn't it?
Posted by Esme Raji Codell at 10:27 AM No comments: 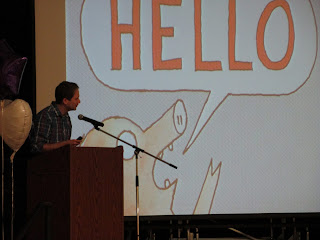 Thanks to everyone who attended Family Reading Night and made it a success! We so appreciate that literary celebrities Matthew Cordell and Amy Krouse Rosenthal took the time to share how they grow an idea into a book. How inspiring!  The themes of the evening seemed to be possibility and connection...with an exclamation point! Our speakers were definitely WOW!

So many people were working together to make this a memorable event.  A gigantic hug and shout out to Dora Sanchez, our reading specialist and fellow reading ringmaster, without whom the evening would not have been possible. Huge thanks also to all the volunteers who made the special sessions so fun:  mailman Carlos Correa who, with the help of a puppet friend, really delivered on a storytime; the entire primary team (insert hearts here) who gave Robert Munsch's The Paper Bag Princess the royal treatment in the form of a reader's theater and crown craft; the 6th graders who came in just especially to perform the amazing literature-based shadow puppet shows that they made for library class; reading specialist Kara Saternus who ran a bookmark-making session that would have done Pinterest proud; and of course our administration who read aloud silly school stories and are always there to lend a hand!  The Stone Ambassadors helped the evening run so smoothly, ever gracious and valiant as they are, and the primary students did a beautiful job of creating art and poetry based on the books of our visiting authors in anticipation of the event, which was used to decorate the stage, signing tables and hallways, so thank you, too, children! A big round of applause to The Book Cellar, our local independent bookseller, who helped organize our authors' visit and made available books for sale so pages can keep turning long after the event is over. We are so fortunate to enjoy this partnership with such a wonderful local business!  There was a small debacle with some of Amy Krouse Rosenthal's titles not having arrived from the publisher on time, but no worries, I've been assured all pre-orders will be autographed and filled by the end of the week, so please let me know ASAP if your child ordered a book and did not receive it by this weekend. 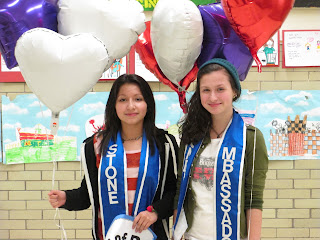 Reading is more than a skill, it's a lifestyle.  By bringing your child to this event, you showed them that reading isn't something we just do for class, but something we do for fun.  Thank you for supporting the goal of creating lifelong readers and lovers of books!  We couldn't do it without YOU!
Posted by Ms. Esme at 10:00 PM No comments: